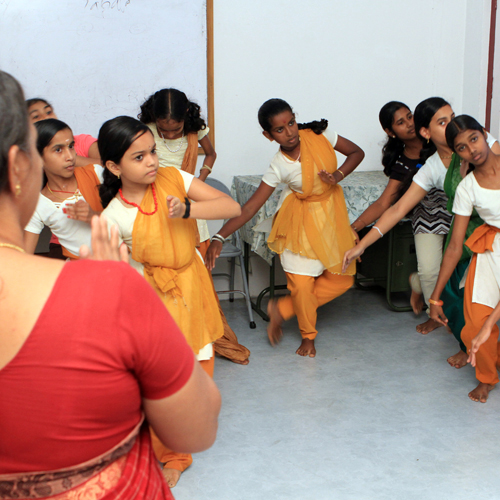 Mohiniyattam, also spelled Mohiniattam is a classical dance form from Kerala, India. Believed to have originated in 16th century , it is one of the eight Indian classical dance forms recognized by the Sangeet Natak Akademi. It is considered a very graceful form of dance meant to be performed as solo recitals by women.

Mohiniyattam was popularized as a popular dance form in the nineteenth century by Swathi Thirunal, the Maharaja of the state of Travancore (Southern Kerala), and Vadivelu, one of the Thanjavur Quartet. Swathi Thirunal promoted the study of Mohiniyattam during his reign, and is credited with the composition of many music arrangements and vocal accompaniments that provide musical background for modern Mohiniyattam dancers. The noted Malayalam poet Vallathol, who established the Kerala Kalamandalam dance school in 1930, played an important role in popularizing Mohiniattam in the 20th century.

The term Mohiniyattam comes from the words "Mohini" meaning a woman who enchants onlookers and "aattam" meaning graceful and sensuous body movements. The word "Mohiniyattam" literally means "dance of the enchantress". There are two stories of the Lord Vishnu disguised as a Mohini. In one, he appears as Mohini to lure the asuras (demons) away from the amrita(nectar of immortality) obtained during the churning of the palazhi (ocean of milk and salt water).

In the second story Vishnu appears as Mohini to save Lord Shiva from the demon Bhasmasura. The name Mohiniyattam may have been coined after Lord Vishnu; the main theme of the dance is love and devotion to God, with usually Vishnu or Krishna being the hero. Devadasis used to perform this in temples. It also has elements of Koothu and Kottiyattom. Mohiniyattam is a drama in dance and verse.

The dance involves the swaying of broad hips and the gentle movements oferect posture from side to side. This is reminiscent of the swinging of the palmleaves and the gently flowing rivers which abound Kerala, the land of Mohiniyattam. There are approximately 40 basic movements, known asatavukal.

The three pillars - Sri Swathi Thirunal Rama Varma, Sri Vallathol Narayana Menon (a poet and founder of the institution, Kerala Kalamandalam) and Smt.Kalamandalam Kalyanikutty Amma (considered “the mother of Mohiniyattam”) - contributed to the shaping out of the contemporary Mohiniyattam during the later part of the 20th century. Guru Kallyanikutty Amma cleared the mythical mystery behind the name of this dance form and gave it the most convincing explanation based on truth, social and historical evolution, interpreting Mohiniyattam as the dance of a beautiful lady than that of a mythical enchantress from heaven

The costume includes white sari embroidered with bright golden brocade (known as kasavu) at the edges. The dance follows the classical text of Hastha Lakshanadeepika, which has elaborate description of mudras (gestural expressions by the hand palm and fingers).

The Jewellery our traditional dancers wear is the typical complete set ofTemple Golden Finish Jewellery with a proper wide Golden Lakshmi beltspecially designed for Mohiniyattam. The foot steps are made tinkling with a good pair of original Chilanka or either known as Ghungroo or Dancing bells worn by the dancer on her legs. The performer also adorns herself with Fresh white Jasmine flowers which is decked to her hair bun arranged on the left side of the head pinned on to a beautiful Jurapin, which makes Mohiniyattam artists distinct from other dance forms artists of India.

The vocal music of Mohiniyattam involves variations in rhythmic structure known aschollu. The lyrics are in Manipravalam, a mixture of Sanskrit and Malayalam. The Mohiniyattam dance is performed to this accompaniment by the subtle gestures and footwork of the danseuse. The performer uses the eyes in a very coy, sensual manner to enchant the mind without enticing the senses.